Okay, so nearly two years since I’ve updated but at least I’ve given you a full five days before Halloween to knit this jumping spider.

And you might need all five of them; this spider is not a light project. 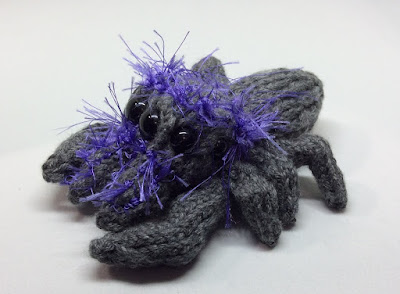 As with the smaller Spooky Sparkly Spider pattern, all the pieces are fairly easy to knit, but there are a lot of them and then there’s the task of getting them all together.

If you’re up for something finicky that will give you a lot of creative possibilities—not just for Halloween, because jumping spiders are amazing year-round—here’s what you need:

Yarn: At least a few dozen yards of fine/sock yarn.

I really liked the way Cotton Fair from Premier Yarns worked for this. It was easier on the hands and hid the stuffing better than Aunt Lydia’s Crochet Thread.

I had a number of unlabeled sparkle yarns as well as some Paton’s Metallic that looked interesting for parts of this pattern but they were not super easy to work with. If you would like a fuzzy spider, you’ll need a couple yards of eyelash or faux fur yarn. This is added later by working it in with whipstitches once the spider is assembled.

This needle and yarn combination will result in a spider that is roughly 3.75 inches (9.5 cm) in length, but scale up or down as you’d like. Personally I may try a very tiny version after a long break from spider legs. I’ve knit at least 88 of them in the last week or so.

With regard to safety eyes, I like the look of six, since the smallest pair on most jumping spiders isn’t very visible. You can still create a convincing look with just four or even two eyes. I used 9mm for the largest center pair and subsequently smaller sizes (7mm, 5mm) from there. I source my eyes from etsy.com/shop/6060.

Knit straight the following rows to create the top of the head.

You should now have 30 sts on three or four DPNs. (It is easier to start with four and move on to three as the head is deceased.)

If you would like a more colorful spider, this is a good place to change colors.

K one rnd before starting the following short rows.

Resume knitting in the round to close of the head of the spider. 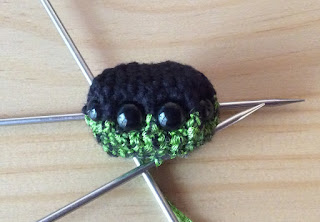 Add safety eyes at this point. Start with the two largest in the center, just below the first rnd of PU sts. then add subsequent eyes, from largest to smallest on opposite sides.

If you’re placing more than two eyes, overlapping the washers takes some extra care. This is easier with safety eyes that use thin metal lock washers rather than plastic. Take it slow and don’t fully snap them in until you’re happy.

Stuff the spider’s head. Cut yarn and draw through remaining sts to close up the bottom. Weave in the ends.

The abdomen of the spider is knit in the round.

CO on 12 sts, distribute on 3 DPNs to work the following rnds. I suggest leaving a long tail, which can later be used to join the abdomen to the head.

Cut the yarn, draw through remaining sts to close, and weave in the end.

You may want to make these in a different color, particularly a bright color yarn, as these can be body parts can be brightly colored on some species of jumping spider.

They are knit in the round. Again, you may want to leave a long tail so they can later be attached to the head.

Co 9 sts and distribute on 3 DPNs to work the following rnds.

Cut the yarn and draw through the remaining sts. Thread the end into the interior. It can then be tucked in to partly stuff the inside.

With all the legs, you’ll want to leave a long tail at the CO and at the end when you draw through. The CO tail can be used to attach the base of the leg to the spider, while the end tail can be used to create the joint in the center. This technique will be described in the assembly portion of the pattern.

There are a total of eight legs, comprised of a front pair, back pair, and two pairs of short, center legs. All are knit in the round.

Co 9 sts and distribute on 3 DPNs.

Co 6 sts and distribute on 3 DPNs.

Co 6 sts and distribute on 3 DPNs.

It’s time to bring your new friend to life. Get yourself a nice big cup of coffee first. Straight pins will make this process easier. Pin pieces in place to ensure you’re happy with their position and to support them as you work. As with the safety eyes, take your time.

It’s much easier to make adjustments as you go rather than take things out and start over.

Start by attaching the jaws to the face just below the eyes. They can be stuffed slightly using the closing tail or scrap yarn. 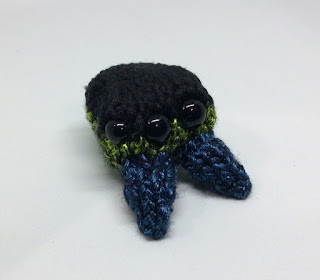 If you wish to make any additions to the head, they are easier done before the abdomen is attached.

If you’re adding any fuzzy elements to the face or jaws, work the eyelash yarn between the rows and rounds using whipstitches and plucking the furry bits free. I’ll sometimes trim them so my spider is more fuzzy than hairy. 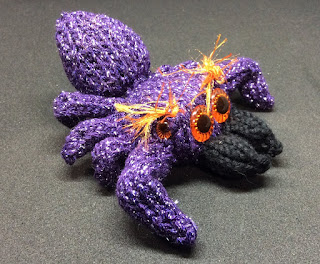 Stuff the abdomen and attach it to the upper back of the head. Raising the abdomen slightly will leave more room for the legs, though you can leave it flat and just maneuver them as close to the center as possible. Don’t worry if your spider doesn’t rest flat at this point. The legs will help with stability. 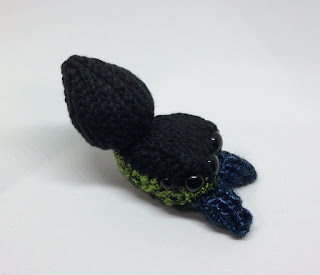 You can leave your spider’s legs as they are, though this may give it a squished appearance. I prefer to add joints, particularly in the back and center pairs.

To add a joint to each leg, thread the closing tail up through to the center of the leg. Pinch or pin the leg so it bows in the center. Make a small stitch just below the bend to secure it in place. You can add a small knot there or thread the yarn though the opposite side and knot at the CO rnd before trimming and weaving in. You can then use the CO tail to attach each leg to the spider.

Start with the larger front legs, attaching them to the head just behind the jaws. Again, use pins to make the process easier. You’ll want the tip of each leg to be somewhat level with the bottom of the spider so they appear to rest naturally. 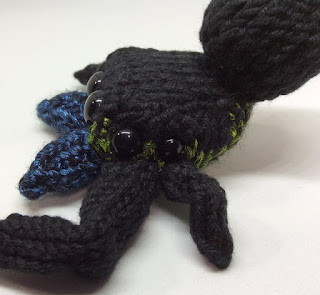 A gold star to you if get through this one. I hope it makes an enjoyable addition to your Halloween or daily decor. Slap it on a headband, sweater, hat, etc. Snuggle up with it during a horror movie or nature documentary. 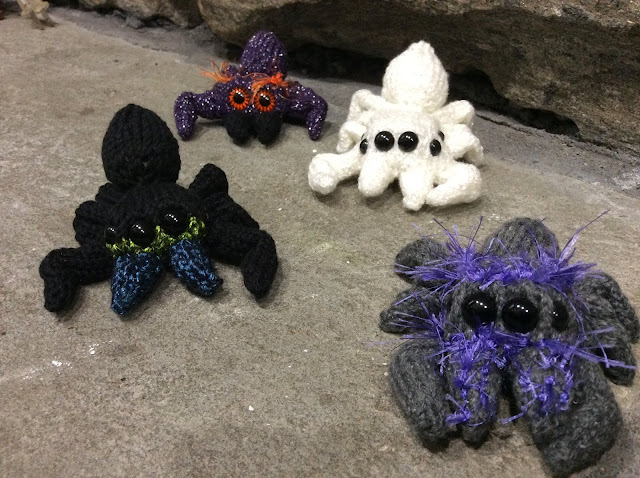 Enjoy and congratulate yourself on knitting so many damn legs.
Posted by Rosemarie Montefusco at Thursday, October 25, 2018